Ron stays at the helm. 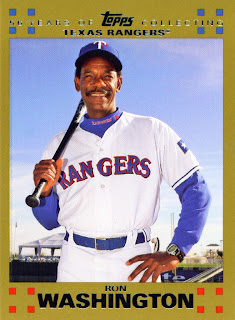 The Rangers have been focusing on locking up key players recently. Talks with Josh Hamilton and Mike Napoli seem to have been all the news. Today the team re-signed what I see as an equally important player, Ron Washington.

Wash, shown here on card 606 of the 2007 Topps Gold set, and the Rangers signed a two year extension. That means that if the last two years are any indication, Ron Washington with be at the helm of the Texas Rangers at least through the 2014 season.

Seems like a sound decision to me. Right now the chemistry in the clubhouse seems to be good. Ron Washington is a integral part of that. No point in messing with a team that is the two-time defending American League Champs. No point as well in letting the guy who is probably one of the most popular managers ever in Rangers history walk.

Right now Washington has the highest winning percentage of any Rangers manager who managed to stick around for any period of time. He's also the third longest tenured manager in team history behind Bobby Valentine and Johnny Oats. That's not bad company. If he can last through his extension he will have fewer games managed than only Valentine.

Congrats to Ron Washington on the extension. Good move by Jon Daniels and company.
Posted by Spiff at 5:18 PM

I'm with you Spiff. Say what you want about him, but he seems to be the right guy for this group of players.