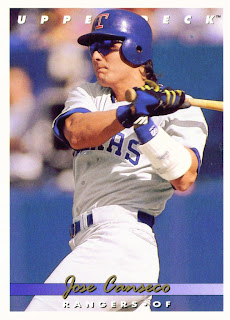 We've all been told to use our heads. It's something parents often admonish their offspring to do. How about using someone else' head? That can happen as well.

May 26, 1993. Cleveland, Ohio. In the bottom of the fourth the Rangers were leading the Indians 3-1. Up came Carlos Martinez to lead off the fourth. Long fly ball to right. Jose Canseco, shown here on card 365 of the 1993 Upper Deck set, tracked it down. Instead of a long out though, the ball hit the top of Canseco's head and bounced into the stands. Solo home run. That gave the Indians an extra out and they managed to score two more runs. Final score: Cleveland - 7, Texas - 6.

That extra run that Canseco gave the Tribe ended up being the difference but that wasn't the only odd thing. First, Jose wasn't charged with an error. Also, he didn't leave the game. Not that being hit on the head was likely to injure Canseco but one might have thought that a ball coming in that high and hard would leave a mark.

Lastly, Carlos Martinez wasn't exactly a home run threat - he hit five all season. Hopefully he sent Canseco a thank-you note for the 20% of his home run total that Jose was responsible for.
Posted by Spiff at 5:31 PM