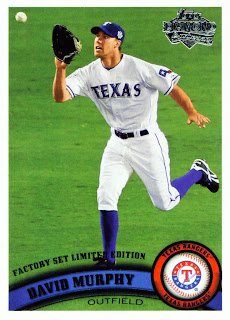 Ok, so the Rangers haven't yet signed the next coming of Sandy Koufax and Bob Gibson - Yu Darvish. They're still hopeful they might get it done before the doomsday deadline of tomorrow afternoon. Still not sure what to think of all that.

Texas did sign Mark Lowe, Mike Adams, and David Murphy, seen here on card 603 of the 2011 Topps 60th Anniversary set, to one year deals. That avoids arbitration with those three players. Gotta say that this sits well with me. Murph is probably the best fourth outfielder in the game. Middle and setup relief is always a good thing. Can't have too many arms in case Joe Nathan doesn't come through.

Josh Hamilton's contract negotiations have also been in the news. Apparently he has said that if a deal is not reached by Spring Training he will cut off negotiations. I am guessing there are two main reasons Texas has not locked him up by now. First is Darvish or another big off-season signing. The money needs to be there. Second is Josh's injury history. I like Hamilton. Like him a lot. Having said that, I am concerned about his injuries. He always seems to lose a big portion of the season. That's not good in a 30-year-old. Neither is the inability to hit during day games. Both could be linked to his physical condition due to his past. Both are also concerns.

Also in the news are rumors that Texas might be interested in Prince Fielder if they can't sign Darvish. Bad move in my estimation. Would Fielder make the team better? In the short-term he certainly would. The question is, would the money put into him be better spent on pitching and locking up players already in place? I have to say it might. The big temptation would be to break the bank to get Fielder. That would result in not being able to sign other young players or keep the ones currently with the club. The result could be that before Fielder's contract is up the team could consist of pretty much him. That's not good. Not good for Prince, not good for Texas.

Anyway, I'm not the one calling the shots and spending the money. The next few days should be interesting though. The face of the Texas Rangers could change dramatically.
Posted by Spiff at 5:08 PM