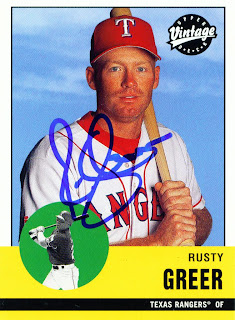 1996 saw the Rangers first ever postseason appearance. It also saw what T.R. Sullivan considers one of the best seasons in Rangers history. Rusty Greer, shown here on a signed 2001 Upper Deck Heritage card, comes in at number 14 on Sullivan's list.

1996 was the real start of Rusty's power playing career. He played in 139 games and got 617 plate appearances that year. He would post a .332 batting average and a .397 on-base percentage. He also scored 96 runs while knocking in 100. He did that with just 18 home runs. What made Greer dangerous to opposing pitching was his doubles. All told he hammered 41 of them. He also stole nine bases without getting caught. Both of those numbers contributed to the number of runs he scored.

As dangerous as he was at the plate, Rusty was no slouch in the field. He played 1,196.1 innings on defense - all but nine of those were in left field and those nine were in center. He would commit just five errors all season to end with a .984 fielding percentage. That was five points above the league average for left fielders.

As impressive as Rusty's season was, he got little recognition for it outside of Texas. There was no All-Star appearance and no MVP consideration. Rangers fans recognized what they had seen though. Rusty Greer was well on his way to becoming a fan favorite in Arlington.
Posted by Spiff at 4:50 PM

Rusty is very high on my list of all-time favorite Rangers.