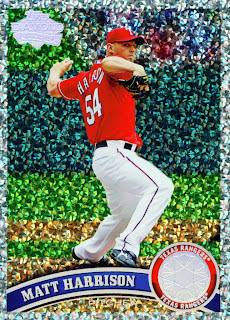 So the Rangers signed Yu Darvish today. Six years at about $60 million. Hopefully this doesn't blow up in their faces. I'm always concerned about this type of deal. Unproven players just shouldn't be able to command such numbers. Texas has scouted Darvish though and that brings some comfort. Jon Daniels knows ballplayers and Nolan Ryan knows pitching. Hopefully neither of them has misread Yu's potential.

With Darvish on board the Rangers rotation now has six pitchers going into Spring Training. That's crowded and someone is going to lose a spot.

Derek Holland and Matt Harrison, shown here on card number 432 of the 2011 Topps Diamond Anniversary set, are likely safe. Both are left-handed, young, and have potential. Holland has a tremendous amount and really seemed to be putting it all together last season.

On the right-handed side Alexi Ogando and Colby Lewis will be battling with rotation new-comers Darvish and Neftali Feliz. Lewis is the old man of the rotation now. He will probably survive based on his big game performances and durability. If Darvish lives up to half his hype he's in. That leaves Feliz and Ogando to battle for the final spot.

Neftali brings his minor league starting experience to the table along with his heat. He seems to carry a lot of potential and eventually moving him into the rotation has been the long-term plan all along. Alexi has starting experience in the Majors but seemed to wear down over the long season last year. Both have success in the bullpen at the Major League level. Whoever loses out on the rotation competition will likely get more bullpen experience this season. Either would be an asset there.

In addition to the big six, Scott Feldman is still lurking in the wings and would probably jump at the chance to reenter the rotation. There's also still some pretty good starting pitching prospects left in the minors.

That's a good situation to have. A new possible impact signing to jazz everyone up. Lots of solid arms to compete against each other. Enough hungry young pitchers to nip at the heels of anyone who becomes complacent. Looks like the recipe for a great rotation.
Posted by Spiff at 5:02 PM

The big question would be IF Feliz is the odd man out of the rotation, does he set up Nathan or go back to being the closer? I think that could cause a lot more problems than just trading Ogando (or someone else). Heck, my team is collecting as many 5th starters as possible maybe the Rangers should call them up.

I would think that if Feliz is the odd man out he either starts the season in Triple A to get some starts under his belt or does long relief. I am guessing that unless Nathan melts down in the first week or so the team will try and keep whomever is the odd man out stretched out to use if a starter goes down.