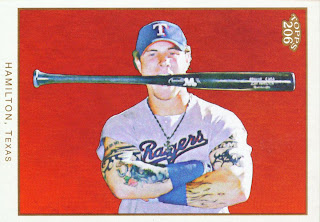 I know a lot of Rangers fans and media were pulling for Texas to sign Fielder. I'm sure he would have made the Rangers lineup out of this world. Having said that I am still a little relieved that they didn't sign him. Most of that relief has to do with finances.

It took $214 million to sign Prince for nine years. Texas is already running at a deficit. If they had signed him then Josh Hamilton, shown here on card 266 of the 2009 Topps 206 set, Mike Napoli, and several other guys would have been gone when their contracts ended. No chance of even talking about re-upping them. That's what got Texas into trouble with Alex Rodriguez. He was one big contract too many. I am afraid that Fielder would have been the same.

Don't get me wrong, Fielder's durability and power at the plate would make most any team better. The thing is, we know Josh Hamilton and Mike Napoli. So does the team. They click in the clubhouse. Fielder might have as well. He also might not have. That's an expensive risk to run. Got to admit that I'll sleep a little better knowing that Texas didn't run it.
Posted by Spiff at 8:06 PM