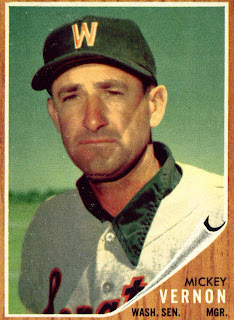 While improvements were being made, Vernon was still dealing with an expansion franchise. That meant a still-developing farm system, no money, and little team cohesion with the revolving door the team had the first year.

With those obstacles it's little wonder that the Senators stumbled again in 1962. Still, a manager can't blame circumstances. Mickey Vernon needed to figure out how to make this team start working if he wanted to keep working as their manager in 1963.
Posted by Spiff at 6:27 PM