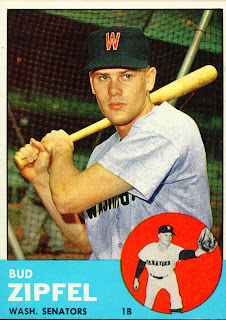 Ok, I'm still two cards short on my 1962 Topps Senators set. Moving on to 1963 however since I'm having a hard time tracking down those two '62 cards at a reasonable price. If I manage to come up with them I'll make a detour back to 1962 at a future date. For now though it's on to 1963.

Leading off the return to 1963 is Bud Zipfel on card number 69 of the 1963 Topps set. By the time this card was issued the Zipfel era was over in Washington.

All told Zipfel would bounce around in the minors until 1966. In that time he would play for four different organizations. Although he would play Triple A ball he would never again see Major League action.
Posted by Spiff at 12:06 PM

Zipfel got some fame from the book Aaron to Zipfel about MLB players. He was an insurance agent in IL and my dad did business with him a few times. He said Zipfel always thought of himself as a Yankee and was sorry that he was drafted away from their organization in the Senators expansion draft.

Actually the Angels drafted Zipfel and then traded him to Washington but that's a minor note.

I do find his attitude ironic though. If he hadn't been drafted away from the Yankees it is doubtful that he would have ever seen MLB action. He would have been pretty effectually blocked by Moose Skowron during the two seasons he played for the Senators and it is unlikely that he would have gotten a callup.