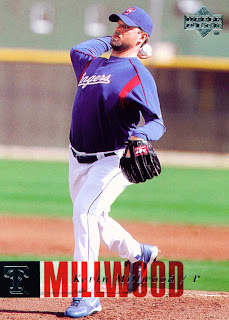 So MLB.com is reporting that the Seattle Mariners have signed former Ranger Kevin Millwood, shown here on card number 839 of the 2006 Upper Deck set.

The Yankees signed him last year to a minor league contract but he never made it to the Majors with them. In May he signed a minor league deal with Boston but they released him in August. Two days later he signed with Colorado.

With the Rockies last year Millwood made nine starts in the second half of the season. He posted a 4-3 record and a 3.98 ERA.

The Mariners have reportedly signed him to another minor league deal with an invitation to Spring Training. The recent trade of Michael Pineda means that Kevin will be competing for a spot in the rotation with several other pitchers including another former Ranger, Blake Beavan.

This seems like a reasonable deal to me. If Millwood catches fire the Mariners are looking good. If his 37 years catch up with him there's little risk. Either way the club gets an experienced veteran with a good attitude to work alongside their young staff in Spring Training. It will be interesting to see what happens.
Posted by Spiff at 12:39 PM

I would have liked to see him come here maybe 5 years ago, but I hope he can just stay healthy and help out some how this year. It looks like we are in for another long season in the Emerald City.