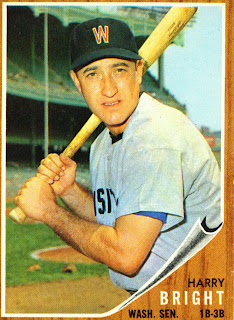 Harry Bright is listed on card number 551 of the 1962 Topps set as playing first and third base. That's probably a bit misleading. Harry did play one game at third and a few innings at catcher but most of his time during the 1962 season was spent at first base.

Bright played 833 innings in 99 games at first base in 1962. He made ten errors over the course of the season for a .989 fielding percentage. That was just one point off the league average.

Offensively Harry had 425 plate appearances in 1962 - more than double the previous season. He improved his batting average 33 points to .273 and inched his on-base percentage up to .319. He also scored 55 runs while snagging 67 RBI for himself. Interestingly, Harry's power spiked in 1962. He hit a career high 17 home runs, four triples, and 15 doubles.

Even though Harry had beat out Dale Long for the starting first baseman's job, the Senators weren't convinced he was a long-term answer. They dealt him to Cincinnati in November of 1962 for Rogelio Alvarez.
Posted by Spiff at 7:24 PM

Yeah, Harry had a hard time nailing down a specific position.