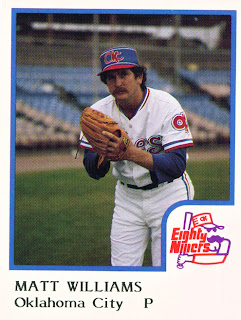 Time for another exciting episode of "Whatever happened to that guy?" Today's contestant is pitcher Matt Williams. This Matt Williams should not be confused with third baseman Matt Williams.

We see Matt today on his 1986 ProCards Eighty Niners card. This set is unnumbered. Looking at the front of the card we can deduce that Matt is a pitcher and throws right-handed. Flipping the card over we see that he is listed at 6-1 and 200 pounds. There is only one year of stats listed for Matt on this card, his 1985 year. Looks like he played for three different teams that year. To take a closer look we turn to the Baseball-reference.com.

Looks like Matt was drafted by the Blue Jays in the first round of the 1981 draft. He spent the 1981 season playing A ball for the Jays and moved up to Double A the next season. After a promotion to Triple A in 1983, things seemed to be looking up. In August of 1983 Matt finally got the call. He appeared in four games for the Blue Jays and went 1-1. Unfortunately, he also posted a 14.62 ERA in eight innings. Apparently the Jays thought he needed more polishing so he spent the 1984 season back in Triple A.

After starting the 1985 season in Triple A for Toronto, Matt was traded to the Rangers who promptly assigned him to Triple A. He pitched a mere four innings there before getting called up to Arlington. In his second Major League stint he appeared in six games and tossed 26 innings while posting a 2.42 ERA. His record was 2-1 with 22 strikeouts to 10 walks.

A record like that makes me wonder what happened the following year when he started back in Triple A. One year with OKC and he was done at age 26. So, what happened to pitcher Matt Williams? An injury? Was his stint with Texas a fluke? Were the Rangers concerned that two pitchers named Williams (Mitch Williams would debut in 1986) would be confusing?
Posted by Spiff at 12:10 PM

Matt's stint with the Rangers was NOT a fluke. He was assigned to Triple A the last day of major league spring training 1986 due to the Ranger's organization going with a youth movement that year consisting of Bobby Witt (21 years old) and Jose Guzman (21 years old) and Edwin Correa (19 or 20 years old). At that time Matt was an "old" 25 year old. Matt's assignment to the OKC 89ers started off great - he had a winning record and was the first player to be considered for a move back to the major leagues. However, as fate would have it, he tore his rotator cuff at some point during that season before any roster moves could be made. Jeff Russell got the call instead and Matt Williams moved back to his home town in Texas where he has raised a family and still resides. Thankfully, he had his education from Rice University to fall back on as he got a "real" job in the corporate world.

A torn rotator cuff would certainly explain why Matt never got another chance with Texas. Too bad as it sounds like he had great promise.

Those kind of things just aren't easy to find in the minor league record. Thanks for the additional information.

Hey, if you know how to get ahold of Mr. Williams please drop me an email. I would love to interview him like I did Willie Lozado.