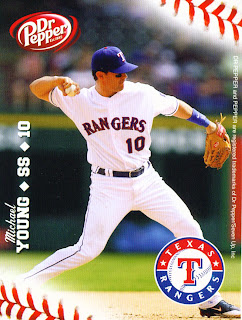 In their win last night in Toronto the Rangers had the usual home runs and other offense. They also had several gems on the defense side of things.

Nelson Cruz snagged an out when he went part way over the wall in foul territory on a full-out run. Reaching into the seats he got a ball that should have been a foul.

Josh Hamilton made an impressive Willie Mays type catch in center field. He caught the ball over his shoulder just before having to put out his hands to catch himself on the wall.

Michael Young was equally impressive. Since he made two great defensive plays he gets today's card, from the 2008 Dr. Pepper set. Mike started off by grabbing a deep bouncer along the line and firing a one hopper to first to get the runner. Later he speared a line drive that appeared headed into left field. Both were very nice plays.

It is good to see the Rangers demonstrate glove work like that. That type of play directly leads to close wins like the 5-4 victory last night. Big bats are sometimes fun to watch but I would rather see a team deny the opponent runs with their defense.
Posted by Spiff at 11:14 AM