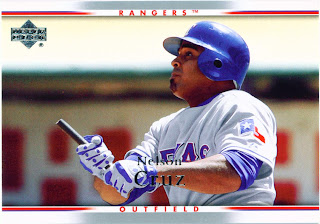 Nelson Cruz, seen here on his 2007 Upper Deck card number 988, led the scoring charge for the Rangers yesterday. I was concerned that Fausto Carmona might be able to stifle the offense. Nellie hit two home runs to prove me wrong. Elvis Andrus also sent his first Major League into the stands as Texas came out on top 8-5.

The club lost Travis Metcalf yesterday as the Royals claimed him off waivers. The Rangers were trying to get him back to the minors but KC snagged him up. To replace him, the Rangers signed Esteban German. Not sure what to think about all that as of yet.

In a tragic note, Angels' rookie pitcher Nick Adenhart died in a car crash early this morning. He had started last night against the A's. He was 22. Police are saying that the crash was caused by another vehicle running a red light. Truly a sad day. My sincere condolances to Mr. Adenhart's family, friends, and fans.
Posted by Spiff at 11:44 AM

What is he doing in that card? Did he break a bat or is that a serious photoshop disaster there?

It is very sad news about Adenhart!

I think he broke his bat. In person the card does not appear to be photoshopped.