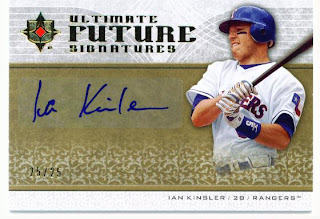 Ian Kinlser led the charge last night as the Rangers routed the Orioles to avoid a sweep. Kinsler, seen here on card number FS-IK of the 2007 Upper Deck Ulitimate Collection set, went 6-6 in the game. Even more impressive, he managed to hit for the cycle. That makes him just the fourth player in Rangers' history to hit for the cycle and the first to go 6-6 in nine innings.

In all fairness though, Ian didn't score the Rangers' 19 runs by himself. Marlon Byrd had a big night as well and would have also gone 6-6 but for an outstanding defensive play. Nelson Cruz hit a grand slam in the fourth and almost got another in the eighth.

All this really couldn't have happened on a better day than Jackie Robinson day. Jackie was a great guy as well as a great ball-player. The world is definitely a better place for his life and accomplishments.
Posted by Spiff at 7:36 AM