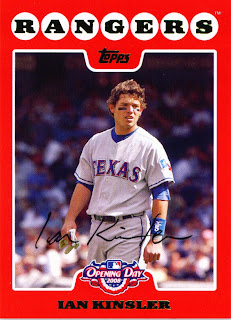 Even though Opening Day was yesterday, the Rangers start their season today. For the first time in several years, the Rangers are opening at home. They are donning their softball team red jerseys as they host the Indians of Cleveland.

Ian Kinsler is shown here on his 2008 Topps Opening day card, number 138. Ian will be started at second today and lead off.

Looks like things are going well so far. According to the Rangers site the game is now in the second inning. Texas has four on the board and the Indians haven't managed to touch Kevin Millwood yet. Here's to hoping to season starts with a win.
Posted by Spiff at 1:41 PM

Rangers are roughing up the reigning CY.