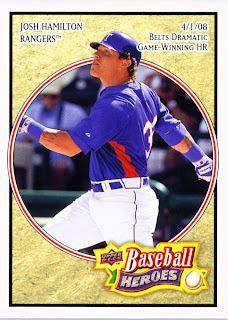 Today's game against the Oakland A's was rained out. Seattle lost earlier today and this was the Rangers' chance to pick up a full game on them in the standings. Instead they have to settle for half a game. Kind of sums up the day's Rangers news, half and half.

On the rained out side, Josh Hamilton appears to be headed for the disabled list. Josh, seen here on card number 12 of the 2008 Upper Deck Baseball Heroes set, apparently injured his ribcage running into a wall in Toronto on April 21st. The club is planning on waiting through the weekend before making a final decision on the 15 day disabled list. Somewhat concerning since Hamilton's personal problems began while he was on the disabled list for Tampa Bay. Hopefully he has moved past that and will be able to get through ok should he need to take some time off. I am not as worried as some over the possibility of his personal problems resurfacing.

On the positive side of things, Josh Rupe has cleared waivers and is now at extended Spring Training. The plan is to "stretch" him into being a starter. After that he will head to Oklahoma City. It would be nice to see Rupe be able to find his niche.
Posted by Spiff at 9:50 PM

It's never a bad thing to pick up half a game on a day off.

Tough luck w/ Josh. He's my favorite "non-Brewer" player in the league, just love the guy. From hearing him and his wife speak on TV, I'm convinced that his past is very far behind him.