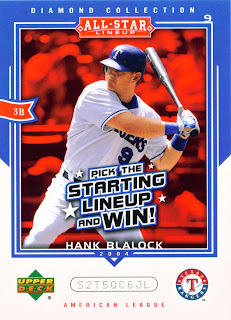 Hank Blalock provided one of the few bright spots in last night's blowout loss to the Kansas City Royals. The Rangers got trounced 12-3 and didn't even get on the board until the eighth inning. Hank, seen here on a 2004 Upper Deck Diamond Collection All-Star Lineup card, parked a moon shot in the upper deck. His blast came with one out and nobody on.

Marlon Byrd followed up with a solo dinger of his own in the next at bat and Jarrod Saltalamacchia parked one in the bottom of the ninth. Must have been solo homer night. At least they managed to get on the board. Better than being shut out I suppose.

Texas sends Kevin Millwood to the mound tonight with the A.L.'s second lowest ERA. This would be a good time to score some runs and perhaps win one. Could be an uphill haul though since the Royals are slated to send Zack Greinke and his league leading ERA to the mound.
Posted by Spiff at 9:08 AM