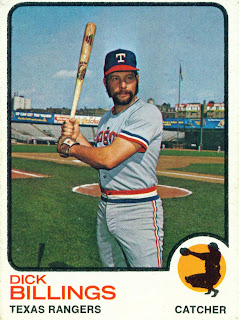 1973 was a down year for Dick Billings, shown here on card number 94 of the 1973 Topps set. He had a rough year at the plate, both offensively and defensively. Richard also found himself eclipsed by Ken Suarez. Suarez and Billings platooned behind the plate but Suarez caught more games by 12. No word on if that is why Dick decided to adopt the mountain man look.

Defensively Billings watched his fielding percentage fall six points to .975. He committed ten errors in 398 chances. 55 opposing runners stole on him while he caught 25 as his percentage tumbled nine points from the previous year to 31%.

Things were even worse on offense. Dick's .179 batting average was the second worst in his career and his .237 on base percentage was the worst in any season where he had at least ten at bats. He had less than half the hits he had the year before and his runs scored dropped as well from 41 to 17. He had just 32 RBI after knocking 58 in 1972.

All in all 1973 was not a good year for Dick Billings. As things would turn out though, it was just the beginning of the hard times.
Posted by Spiff at 6:53 PM

Billings had a better year than my bud and his teammate Rick Stelmaszek!