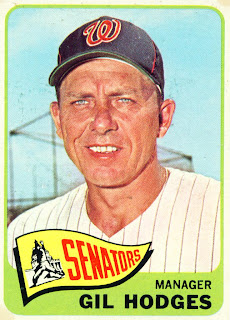 Today's Senators card is the only one I have from 1965. Number 99 in the Topps set, Gil Hodges.

1965 was Hodges' third season at the helm of the Senators. He had taken over midway through the 1963 season as the third skipper of that season.

Each of the two previous years he had led the team to a better finish than the year before. 1965 would be a continuation of the theme as Washington improved by eight wins. They managed to move up from ninth in the American League to eighth.

Gil is probably better known from his playing days with Brooklyn and his managing time with the Mets than from his time leading the Senators.
Posted by Spiff at 6:27 PM