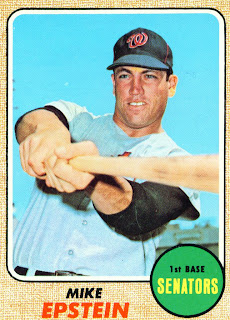 Considering that 1968 was the year of the pitcher, Epstein actually put up some decent numbers. He managed a .234 batting average in 448 plate appearances. His .366 slugging percentage was third in the starting lineup and he tied Frank Howard for the top on base percentage at .338. Mike knocked 13 homers and punched in 33 RBI. He also scored 40 runs himself and worked 48 walks. He was fourth in the American League in hit by a pitch with 13.

In the field Mike was no Gold Glover but he probably wasn't a defensive liability either. His .987 fielding percentage was only two points below the league average of .989. In 1030 chances Epstein muffed 13 times. He took part in 83 double plays and had 70 assists for the season.

All in all 1968 wasn't a bad year for Mike Epstein. In fact, his career seemed to be looking up. His key numbers were up and he was only 25. Bigger things seemed to be on the horizon for him if he could just hold course.
Posted by Spiff at 11:53 AM