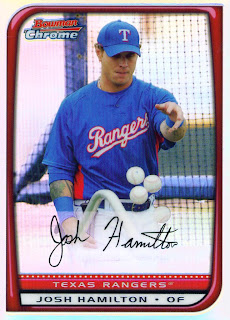 Wow! Just realized that I haven't featured a Josh Hamilton card on the blog since September 29th of last year. Guess that's what the off-season will do for a guy. Today is the end of the drought though as we see Josh on card number 174 of the 2008 Bowman Chrome Refractors set. The card really did scan well for a shiny one.

Well, almost all the Rangers players are in camp in Surprise, Arizona. Taylor Teagarden is apparently looking good as are several of the pitching staff. Josh Hamilton is in camp and working out. He claims to be feeling great and ready for the season to start. He is also back to his old toe-tapping swing after trying to adjust it some last year between injuries. That experiment didn't work out well at all.

Last year Josh predicted 90 Ranger wins and everyone laughed. The team won 87 games and stayed in the race until the final few games of the season. This year he is calling for 96 wins. Talk about going out on a limb. Of course with the AL West as good as it is it just might take that many wins to get to the post-season.
Posted by Spiff at 7:03 PM

I am so ready for some baseball!! And I am really optimistic about the Rangers this year. I haven't felt this way this decade.