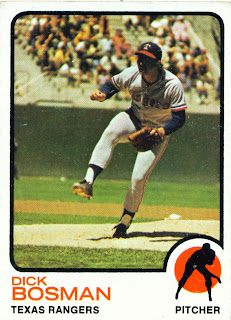 Less that two days until pitchers and catchers report. With little news from the modern Rangers I thought this would be a good time to take a look at a past pitcher. Dick Bosman appears here on card number 640 of the 1973 Topps set. I must say that I like this card, a rare action shot. Seems like the picture was probably taken during a game as there is an umpire slightly visible in the background on the left and the stands are full of people.

Bosman's time in a Rangers' uniform in 1973 was brief. He started the season with Texas but he and Ted Ford were traded to the Indians for Steve Dunning on May 10th. Dick wouldn't return to the Rangers until he did so as a pitching coach in 1995 under then manager Johnny Oates. He managed to keep that job until 2000.

Prior to the 1973 trade Dick started seven games for Texas. He won 2 and lost 5 while posting a 4.24 ERA. He did manage to complete one game and that one was a shutout.

After that it was off to Cleveland where he started 17 of his 22 appearances. His 6.22 ERA resulted in one win and eight losses. He completed two games.

As bad as things were in Texas in 1973 for Dick Bosman, they didn't get any better in Cleveland.
Posted by Spiff at 9:02 PM

I once met Dick Bosman and he is one of the nicest guys in baseball I've had the privilege of meeting.