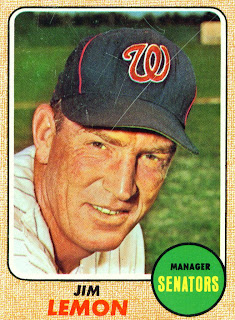 With the off-season trade of Gil Hodges to the Mets following the 1967 an opening was created at the helm of the Senators. Jim Lemon, shown here on card number 341 of the 1968 Topps set, was hired to fill the vacancy.

Jim's card looks a little beat up here. Jim had to feel that way in 1968. Gil Hodges was popular and had been improving the club's record every season for four years. In 1968 the bottom fell out. Under Lemon's leadership Washington dropped eleven wins from the previous season and ended at 65-96.

That record was enough to drop the team from a seventh place AL finish in 1967 to a tenth place one in 1968. It was also the worst record in the entire Major Leagues. Perhaps even more ominously, the club's attendance fell to 546,661 for the season, the lowest of any MLB club. Lemon was fired after the season, his only as a Major League manager.
Posted by Spiff at 3:51 PM