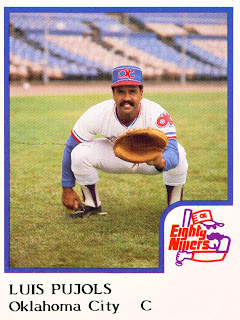 By the time Luis Pujols appeared on this 1986 ProCards card he was about done. After spending the 1986 season with Okalahoma City the catcher would call it a career.

The back of this card records Luis' 1985 stats for the Rangers. One game, one at bat, and one hit. A batting average of 1.000. According to Baseball-reference.com Pujols caught two innings in that game and recorded a 1.000 fielding percentage as well.

That one game took place on May 22, 1985. Luis replaced Glenn Brummer in the top of the eighth inning in a game against Kansas City. Brummer had been replaced by a pinch runner the previous half inning. In spite of Luis' efforts, the Rangers lost the game 6-3.

That game was the end of Pujols' nine season MLB career. In addition to his time in the minors Luis spent seven seasons with the Houston Astros and one with the Kansas City Royals before coming to Texas. Most of that time was spent as a backup catcher but he did manage six post-season appearances with Houston in 1980 and 1981.
Posted by Spiff at 12:57 PM