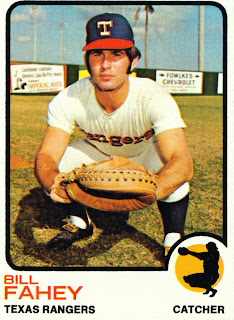 So Andres Blanco seems to have won the utility infielder position and might even be the Opening day second baseman if Ian Kinsler isn't ready. That's got to be a blow to Joaquin Arias and Esteban German who have been trying to get that spot nailed down all spring. Jarrod Saltalamacchia is back to playing in A games and is hoping to be ready by Opening Day. Still some uncertainty behind the plate though. It will be interesting to see how everything shakes out with less than a week to go before Opening Day 2010.

1973 must have been a year of uncertainty behind the plate for Bill Fahey, seen here on card number 186 of the 1973 Topps set. After spending parts of the 1971 and '72 seasons with the Senators and Rangers he spent the entire 1973 season in Triple A. Apparently with Ken Saurez, Dick Billings, and Rick Stelmaszek on the roster the team just didn't have room for Bill.

Bill didn't waste his time in the minors though. He posted a .278 batting average with 44 RBI in 104 games. He also posted a .987 fielding percentage. That was almost as good as the Rangers starting catcher, Ken Suarez.
Posted by Spiff at 11:07 AM

On a side note, my blog www.canadacardworldblog.com has been nominated for the Upper Deck Blog Awards. If you're interested in some free sports cards, please visit our site, follow the simple rules, and maybe we both can win!