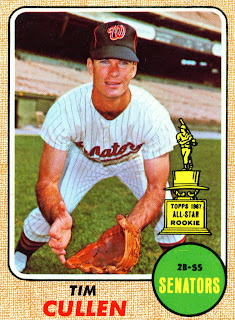 Apparently Tim Cullen, seen here on card number 209 of the 1968 Topps set, was a player the Senators couldn't live without. In February of 1968 the White Sox along with Buster Narum and Bob Priddy. In exchange Washington received Ron Hansen, Dennis Higgins, and Steve Jones. On August 2, 1968 Washington sent Ron Hansen back to Chicago in exchange for Tim Cullen. Seems like the original trade could have been kept much simpler to start with.

In his time with the Senators in 1968 Tim served as a backup middle infielder. In fact, the '68 Senators page at Baseball-Reference classifies his position as "MI". He carried out these duties in 47 games that year. All but three of those appearances were at either second base or shortstop.

Tim had 126 plate appearances with Washington in 1968. He managed 31 hits and seven walks. That translated to a .272 batting average and a .323 on base percentage. He managed only one home run and 16 RBI.

The interesting thing is that Tim's overall 1968 numbers didn't differ all that much from his 1967 numbers. Some categories were slightly up and some were slightly down but they were all within shouting distance. Makes me wonder if the rookie crop was just thin that year or if Topps was just free in handing out its All-Star Rookie designation.
Posted by Spiff at 11:27 AM

Tim Cullen was recognized by Topps as the all-rookie shortstop (because Rod Carew was the 2nd baseman).

A quick check of 1967 shortstops on baseball-reference.com shows that the following rookies had significant playing time at shortstop in 1967:

It seems like Gene Michael would have been a better choice.

One of my themes that I collect the Topps All Star Rookies. Sweet.

"you drop your balls"
http://www.myfoxdfw.com/dpp/good_day/team-mascots-battle-it-out