Cards from heaven or Anaheim? 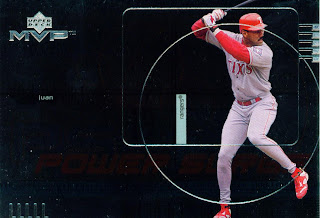 So I go to the mailbox this morning and find a bubble mailer that I was not expecting. I couldn't think of any trades or purchases that should have been coming in. The return address said RWH. As in RWH from I Heart Halos. Cool!

I still had no idea why RWH would send me cards but I opened the package anyway. A note, an over-sized Ivan Rodriguez card, and a nice looking stack of Rangers. The note reminded me that RWH had sent me some Rangers last year about this time and that both the Rangers and Angels had done well last season (the Halos better than Texas). This on field performance was attributed to the sending of the cards. The hope was expressed that a similar unexpected gift would have similar results this year. Blessings were bestowed on new Ranger Vladimir Guerrero. Certain here unmentioned AL West teams were consigned to the cellar as well.

After reading the note I turned to the cards. The stack covered the nineties to now and hit several of my team set needs. In fact, a sizable portion of the cards were ones I needed, including the 1999 Upper Deck MVP Power Surge card of Juan Gonzalez that I am showing in this post. The card is actually a shiny silver color but scans black. With so many hits I began to wonder if RWH was on to something, or perhaps on something. Either way this was too good a gift to be ignored. Thanks RWH! I will be getting together a return package for you. Hopefully it will be as good as the one you sent.
Posted by Spiff at 10:18 AM

Well, with the beating my team took this offseason and the rise of the rest of the division, I figured my boys needed some good karma. Glad you could use some of the cards.