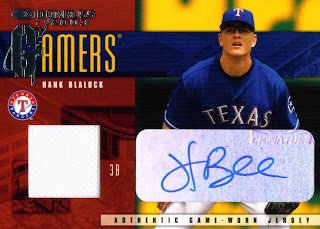 So it's getting down to crunch time in Spring Training. Players are getting cut or sent down and rosters are getting finalized. Only ten days left until Opening Day 2010.

Jarrod Saltalamacchia says that he is pain free now. He took batting practice this morning and said everything felt fine. This after being sidelined for a week with muscle spasms. Hoepfully he will be able to get in shape quickly. He only has about eight more games he can play in before the start of the season. It will be interesting to see if he makes the Opening Day roster.

Ron Washington says that he isn't bothered just yet by the Rangers record this Spring. He does say that this is the day to start ramping things up for the season. Time to get in the habit of winning. Good idea. Ron is also impressed by Julio Borbon's play in center. Apparently Borbon has made some marked improvement over last year. This is good news as it will probably save some wear and tear on Josh Hamilton. Vladimir Guerrero is also on Washington's good list. So far he's been impressed with what he's seen. More welcome news. I would like to see this signing work out well.

Coming down to crunch time in the Devil Rays camp as well. Former Ranger Hank Blalock is surprisingly still in camp. Hank, shown here on a auto/jersey version of his 2003 Donruss Gamers card (46/50), wasn't given much of a chance to make the team when he reported in earlier this month. Manager Joe Maddon even said that he didn't see Blalock being with the team when they broke camp. Now Joe says that, "I think Blalock coming in and doing as well as he has, has raised questions I didn't have in the beginning,"

It's about time to answer some of those questions in all the MLB camps. The teams only have about ten days to come up with their final answers. Here's to the Rangers getting an "A" on their answer.
Posted by Spiff at 5:06 PM