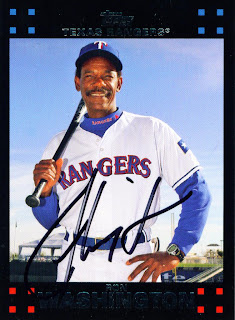 I am sure that everyone knows by now about this story and this story. To say that this is disappointing is an understatement. Ron Washington is a manager, not some rookie kid in the clubhouse. He is supposed to lead the team in a positive direction. To see a man so baseball smart be so life stupid is very sad.

What makes it even worse is that I like Ron Washington. I know some folks don't, they take issues with his handling of the pitching staff. It seems to me that he has really learned a lot since starting this whole manager gig. Hey, he's led the team to contention and he's a nice guy on top of that.

Maybe it's the nice guy in Ron that led to this. Maybe he just gave in to peer pressure, both as a player and as a manager. Maybe he got to thinking that he was too good of a guy to get caught up in something like this. Maybe not. Either way he made the choice and there is little excuse to be given. I find it heartening that he didn't offer one, simply took responsibility for his actions.

So, what should be done? Should the team fire him? Not now. They fire him now and it simply tells all the other guys on the team that honesty is not the best policy. If they were going to fire him they should have done it last summer when they got the positive test notice. To do it now will only empower the guy that Randy Galloway talks about here.

So, if firing is not really an option at this point, then what? Forgive and forget? Well, Ron took responsibility for his actions and has already taken steps to prevent the situation from reoccurring. In such circumstances forgiveness is called for.

To forget however would be to give license. Trust has been violated here, the more so because of Washington's position. That trust must be earned back, the greater the trust violated the more work to be done in the re-earning. Part of that has apparently been one reason the Rangers' decided not to sign Ron to a long term contract before the season started. The second is the strict drug testing he now has to undergo for MLB and the drug treatment program he underwent. There's going to be hard questions to answer and respect that is no longer there. You can be sure that the Rangers and the media will be watching Ron like he was a rich uncle on life support.

Where to now? It's time to play ball. If Ron Washington meant what he said and keeps his boat between the banks then we judge him on how the team fares. A relapse should result in immediate termination, no matter the circumstances. It's harsh but there really is no other way. If the rules are not enforced then those who follow them are penalized.

So to Ron Washington: You are forgiven and the organization is standing behind you. I for one will continue to wish you the best and cheer you on. You will hear no booing or razzing from my seat on this count. Time to move on and win. Time to show what a "good person" you are, no need to remind me, just show me. More importantly, time to live the rest of your life without such poor decisions.
Posted by Spiff at 8:00 PM

Yep, disappointed (he's a former Dodger farmhand, you know). But not above forgiveness.

I have created a new blog,ultimateset.blogspot.com, based on condensing my card collection. I made it to the 1981 Rangers today and posted a link to this blog.

I was disappointed to hear about what he did. Maybe he should be suspended for awhile.
Unless he can do something big with this team this season, I think his day's are numbered as manager.