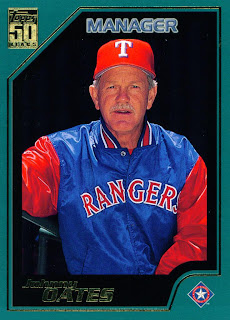 The Rangers have named their all-decade team for the 2000-09 decade. A panel made up of media, club officials and former players made the selections.

Not surprisingly, Johnny Oates was named as the manager. Oates, shown here on card 343 of the 2001 Topps set, was the Rangers manager for only one and a partial seasons during the decade. The team had a losing record under him in that time. Of course the team had a losing record most of the decade and Johnny was the only manager to ever take the team to the post-season and is extremely popular. I like this selection but wouldn't have argued with Ron Washington either.

Pudge Rodriguez was named as the catcher. Ivan finished the decade with Texas last season but it was his play from 2000 to 2002 that got him on the team. Can't complain about this selection at all.

First base was Mark "Money Man" Teixeira. Money played for the Rangers from 2003 until part way through the 2007 season. His power numbers really can't be beat by any other first baseman during the decade. Besides, Texas was able to sucker Atlanta out of some cool players in return when they shipped Money off.

Second base is Ian Kinsler. No real surprise there. Kinsler is just now getting his stride but he has been a great player to watch and shows a lot of promise. This selection seems like a good one although Alfonso Soriano might have a case as well.

Alex Rodriguez is the shortstop. Purely on numbers this selection makes sense. Probably the less said beyond that the better.

Michael Young edged out Hank Blalock at third base. This selection makes little sense to me. Blalock played third longer during the decade than Young and did more while there. I like Michael but he has played there just one season. He did far more at shortstop than he has at third. Seems like it might have been a better idea to drop A-Rod and give short to Young.

The Rangers' outfield has been a mess the past decade. Josh Hamilton, Marlon Byrd, and Gary Matthews Jr. are who got the call. Matthews is definitely the weak sister of the three and I could see lots of plausible arguments as to a replacement for him and possibly at least one of the others.

Rounding out the position players was Rafael Palmeiro at DH. Raffy was in his second stint with Texas from 1999 to 2003. His decade numbers are impressive with the bat. Of course the steroid issue hangs over him. Off the top of my head though I can't think of anyone else to put in this spot.

The starting rotation is led by Kenny Rogers. The other four are Kevin Millwood, Vicente Padilla, Rick Helling, and Scott Feldman. It is a reflection on Texas pitching that none of the four have an ERA under 4.00 for the decade. Personally I would like to see Padilla dropped and another reliever added.

The bullpen consists of only two guys, a setup man and a closer. Where's the middle relief? Anyway, Frank Francisco is the setup man and Francisco Cordero is the closer. No real disagreements with either.

So there you have it. Any thoughts? Who would you replace? Who got left out? Why?
Posted by Spiff at 9:30 PM