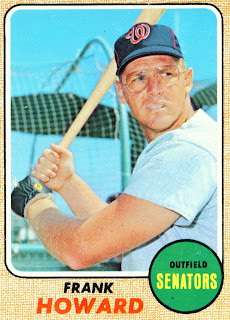 Frank Howard had shown flashes of what was coming in 1968 but that year was the the start of his reign as Washington's undisputed power king. Here we see Frank on card number 320 of the 1968 Topps set.

As the team's starting left fielder in '68 Frank appeared in 158 games. He logged 1,337.2 innings in the field, the majority in left field although he did play some first base. He handled 655 chances in that time and made 19 errors for a .971 fielding percentage. That was below the league average.

Frank's home runs, total bases, and slugging percentage led the league as well as the team. His RBI were second in the league. That resulted in an All-Star appearance, Howard's first. The Senators may have gone off the cliff in 1968 but Big Frank Howard was just hitting his stride. The future looked bright for the bespectacled big leaguer.
Posted by Spiff at 10:52 AM