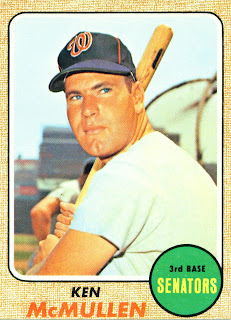 Ken McMullen appears here on card number 116 of the 1968 Topps set. In 1968 he appeared in 151 games for Washington, all but ten that the team played that season. 145 of those games were started at third base. He also played shortstop in eleven games for an average of three innings a game. Clearly Ken was the Senators' primary man on the hot corner.

Ken made 626 appearances at the plate in 1968. He managed 138 hits and 63 walks while striking out 66 times. That translated to a .248 batting average (second highest in the starting lineup) and a .326 on base percentage (also second in the starting lineup). Ken belted 11 doubles and 20 home runs (second highest on the team). He knocked in 62 RBI (another second on the team) while scoring 66 times himself (tied for second on the team with this one).

All in all Ken wasn't a bad third baseman in 1968. He certainly wasn't the reason for the Senators' dismal showing that year.
Posted by Spiff at 4:15 PM