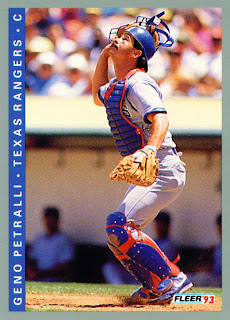 So it appears that Taylor Teagarden and Jarrod Saltalamacchia are in a dead heat as to who will be the Rangers' starting catcher this season. Both are doing well in Spring Training so far and there is the possibility that they will share the catching duties.

By 1993 Geno Petralli had lost his starting catching job to Ivan Rodriguez. However, since he is in his catching gear on card number 689 of the 1993 Fleer set and Pudge isn't he gets to try and catch up with the rest of the cards I need for the team set.

Three cards left. If you have any of them and are willing to part with them (or have any cards previously listed on wantlist posts) then shoot me an email. I am sure we can work out a trade. Thanks!
Posted by Spiff at 7:19 PM