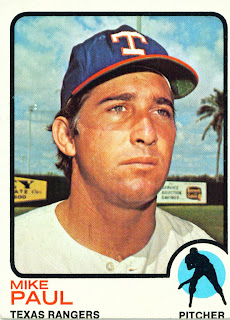 So the Rangers had yesterday off but Anaheim lost so Texas gained a half a game in the standings anyway. In the absence of a recent game I decided to take another look back at 1973.

Mike Paul is show here on a miscut copy of card number 58 of the 1973 Topps set. Mike doesn't look particularly thrilled to be having his picture on a baseball card. Could be the airbrushed cap that has him unimpressed. No reason for that Topps, Mike was with Texas the entire 1972 season.

In 1973 Mike served as both a starter and a reliever for the Rangers. He started ten games and appeared in 26 more in relief. He posted a 4.95 ERA on the year and had a 5-4 win-loss record. Mike struck out 49 of the 401 batters he faced and walked 38 of them. Two of the walks were intentional.

While Mike had started the season with Texas he wouldn't finish it with the club. On August 31, 1973 the Rangers sent Mike to the Cubs for a player to be named later. On November 14th of the same year the Cubs sent pitcher Larry Gura to Texas to complete the deal. Texas wouldn't hang on to Gura either and would ship him off to New York in a trade on May 7, 1974.
Posted by Spiff at 1:19 PM