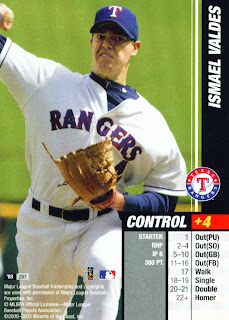 Shocker week in the contest. There were several surprises this week in the two games the Rangers played in San Diego against the Padres. The result is a little bit of tightening in the points standings.

The first surprise was the shutout that the 2009 Rangers suffered in the Strat-O-Matic game. The first time the Rangers offense has been entirely shut down in the contest. Texas pitching managed to match the Friars' staff for eight innings but it was the two runs that Kevin Millwood coughed up in the first that sealed the deal. Padres win 2-0. One point if you predicted the Rangers to lose the Strat-O-Matic game.

The next couple of surprises came in the MLB Showdown game. Texas started Ismael Valdes. You can see how he appeared in the game on card number 297 of the 2003 MLB Showdown set. Valdes turned in a very uncharacteristically dominating performance. He allowed just one run in eight innings while striking out eight and walking just one. He also went 2-for-3 at the plate with a double and a run scored. Amazing for one of the weak links in the starting rotation. The offense was not stingy in backing Valdes as they plated seven runs for him. Brian Shouse came in to mop things up in the ninth and the day got ugly. I pulled Shouse after he allowed three runs and had two men on. In came Jeff Zimmerman. The first batter to face him was Ricky Henderson. He took Zim's first offering over the wall for a game tying home run. Jeff then got the last out of the inning. Bottom of the tenth, game tied. Ugueth Urbina in for Texas. Leadoff batter Ryan Klesko hammers a walk-off long ball. I was stunned. Padres win 8-7. One point if you predicted a Texas loss in the MLB Showdown game.

Ok, on to the next match-up. This week the Mets come into Arlington to face off for a second time with the Rangers. Time is running out in the contest so make sure you get your predictions in as to how the Rangers will fare in each game and which Rangers team will score the most runs.

For details on how this contest works please see this post.
Posted by Spiff at 4:52 PM

Wow, I had forgotten that Williams lasted that long as the Senators' manager.

The Rangers win both the Showdown and Strat-O-Matic versions of the game and they will score more runs in the Showdown game.