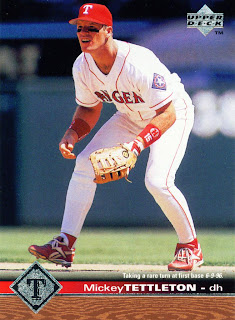 So I have the completed 1996 Upper Deck set. That brings us up to the 1997 Upper Deck set. This set is actually probably in my top 10 or 15 favorite sets list. The design as a whole really doesn't stand out but I do like the captions. As you can see on card number 506 of the set even a photo that doesn't match the player's listed position is explained. It's kind of hard to read but right under Mickey's left foot is a caption that reads, "Taking a rare turn at first base 6-9-96." Knowing when and where a photo was taken and what the player was doing is pretty cool and I wish the idea had taken with some of the other card companies and that Upper Deck had continued it.

If you happen to have any of these cards and would be willing to trade them please let me know. I would be more than happy to work out some kind of trade with you.
Posted by Spiff at 10:34 PM