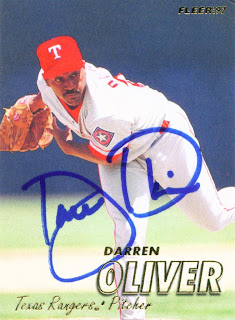 This signed 1997 Fleer card of Darren Oliver came in today. I had sent it another card to Darren on April 20, 2010. He signed just this card and sent both back.

It would have been nice to get both cards signed but I understand players limiting the number of items they sign at a time. Oliver's been around a long time and was pretty popular with the Angels so he most likely gets a lot of requests. Can't say I blame him for trying to cut down the time it takes to respond. I do appreciate him taking the time to sign this card and to send back both of the cards I sent him.

***Just a quick reminder that I will be posting the results from week six of the Strat-O-Matic contest tomorrow. Make sure you get your entry in before then.***
Posted by Spiff at 12:15 PM