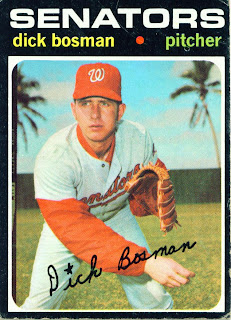 Today we have the workhorse of the 1971 Senators starting rotation, Dick Bosman. Dick is seen here on card number 60 of the 1971 Topps set. Gotta love the signature with the star in place of the dot in his first name.

Dick's 3.73 ERA was third on the starting staff. He also had some high numbers in earned runs allowed and walks permitted. He lost 16 games as well. Of course, most of the staff didn't log anywhere close to the number of innings that Dick did. Denny McClain was the only one close with 216.2 innings and his numbers are all worse than Bosman's.

If the Senators had an ace in 1971 Dick Bosman was the man. Of course he had a losing record at 12-16 but so did the team overall. Perhaps workhorse is a better description than ace.
Posted by Spiff at 10:54 AM

Love the star! We like ourselves, don't we Dick?