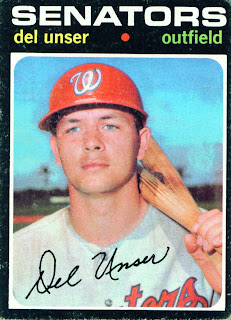 This card, number 33 in the 1971 Topps set, was the first Senators card that I obtained for my collection. I remember I was about 13 years old and was in a card shop when I saw it. It was in a cardboard box and was packaged with about four other 1971 Topps cards for a buck. I was just becoming aware that the Rangers hadn't always been in Texas. I wasn't sure what year they had moved and didn't even know that there had been two Senators teams. I grabbed the package anyway and was thrilled at my purchase. This card was from before the Rangers were the Rangers. It had to be old. It immediately gained a prominent spot in my collection on that basis alone.

The other cards were non-Senators and have long ago left my hands but I hung on to Del Unser. Eventually he got some company as I added a few more Senators to the collection. I finally did my research and discovered the two incarnations of the Senators. Fortunately 1971 was part of the franchise that moved to Texas. I would have hated to have found out that Del wasn't part of the heritage of the team that I collect now. Part of the Rangers' heritage was all that Del would be involved in. 1971 was his last season with the team. He would be traded to Cleveland in December of 1971 and wouldn't make the move to Texas.
Posted by Spiff at 12:01 PM

I also picked up this card at a young age because as a Phillie fan, I had no idea that a pre-mustache Unser existed! It also led me down the same path as you. I started asking my Dad about the Senators and what had happened to them and it kind of blew my mind that cities sometimes lost their teams.

Jim - I had much the same reaction. I spent years wondering how a city could just lose their team.

My memory of Del Unser comes from his 1970 card. It was first card I got when I opened the pack (yes I can remember this) I discovered that the local supermarket sold cards rather than my local convience store. Like a gold miner finding a new vane. It was a whole new series of many player I had never heard of before.