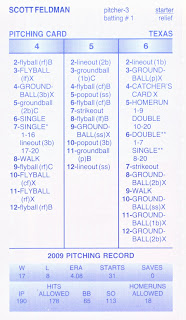 Brutal week in the contest. No other way to describe it. The Mets put the hurt on Texas for sure this week.

First off was the MLB Showdown game. Texas lost to New York 4-2 as a ninth inning rally attempt failed. This was a let down but not a beating. One point if you predicted Texas to lose this game.

The beating took place in the Strat-O-Matic game. Scott Feldman, shown on his 2010 Strat card, started for the Rangers. He would last only three innings as the Mets jumped on him for five runs. Only three of those runs were earned however as Michael Young committed two errors in the first three innings and both base runners he allowed scored. Derek Holland came on in relief and went five innings. He would melt down in the 8th though and allow seven runs that inning including a three run homer by Fernando Tatis. That would be a total of nine runs allowed by Holland. Jason Jennings was able to come in and shut the Mets down in the ninth but it was too late. While the pitching was getting trounced the offense was having trouble getting going. The first Texas hit was in the 5th and the first run wasn't until the 6th. All told the Rangers were able to plate only 4 runs. Mets win 14-4. One point if you predicted the Rangers to lose this game.

This is the first blowout Strat game I have played. In that sense the game seems to hold more to the actual game than Showdown does. There do seem to be a lot of laughers in Showdown. Almost as if the scoring is too easy and too often.

Ok, on to the final matchup in the contest. The final game will see the Rangers take on the Phillies in Philadelphia. Be sure to get your guesses in early as this is the final opportunity to gain points. Remember, you need to predict how the Showdown Rangers will do and how the Strat-O-Matic Rangers will do and which Rangers team will score the most runs.

For details on how this contest works please see this post.
Posted by Spiff at 5:13 PM

Strat-o-matic scores the most runs.

I'll take the Rangers to win in both Strat-O-Matic and Showdown and I think they score the most runs in the Showdown game.