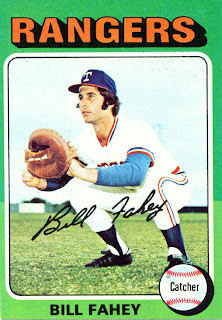 To start with Bill ended up in the backseat behind first string catcher Jim Sundberg. Sunny was in his second year of major league service and suffered through a sophomore slump with a .199 batting average.

In the 39 plate appearances he got, Bill was better with the bat than Sundberg. He posted a .297 batting average and a .316 on-base percentage.

While having an edge at the plate Fahey struggled to keep up behind the plate. His .983 fielding percentage was two points higher than Sundberg's but he caught just 21% of baserunners stealing on him. That was less than half the percentage Sundberg caught.

All things considered it was looking like Bill had lost the starting catcher's job to Jim Sundberg. If something didn't happen quick the situation would become permanent. Something did happen but it wasn't to Bill's liking. On June 21st while in California Fahey broke his hand. Apparently it was another accident since he didn't even play on the 20th or 21st. That injury would sideline him for nearly two months. Not a good occurrence. With three major injuries in three seasons Fahey now had to be concerned with being labeled as injury prone.
Posted by Spiff at 12:48 PM

That's one of my favorite '75 cards. Sundberg's too.