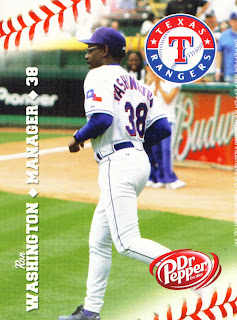 Long-time readers of this blog will remember the post I wrote in March of last year about Ron Washington. The news of Washington's positive Cocaine test during the summer of 2009 had just broken. The title of my previous post says it all: "Disappointed."

Washington, shown here on his 2008 Dr. Pepper card, came clean about the whole mess. He admitted to his use and stated that it was a one-time experiment. According to him, he had never used since the time of the test in 2009 or before that. Some folks believed him, some didn't. There were lots of calls for his job and blood seemed to be in the water. From the looks of things Texas was going to be looking for a manager sooner rather than later.

Jon Daniels and the rest of the upper management in the organization didn't follow conventional wisdom this time though. They stood behind Washington and kept him on as manager. That was decision number 12 on T.R. Sullivan's list and it shocked and angered quite a few people.

In 2010 and 2011 Ron Washington went out and showed the baseball world just how smart Jon Daniels and the rest of management were to keep him. Less than a year removed from the controversy he led the Rangers to their first ever World Series appearance. He followed that up by walking them back to a second consecutive appearance this year.

The Rangers could have fired Ron Washington. They didn't and instead he led them to the World Series twice in a row.
Posted by Spiff at 12:04 PM