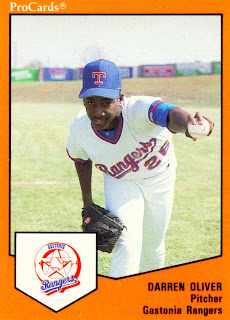 Texas made Oliver their third pick in the 1988 draft. The same year he played in Rookie level ball with the GCL Rangers. After posting a 2.15 ERA he was promoted to the Gastonia Rangers in A ball.

In 1989 for Gastonia the 18-year-old pitched a minor league career high 122.1 innings in 24 games. He started 23 of those games. Ollie's ERA for the season tallied to 3.16 and his WHIP to 1.373. While those weren't bad numbers it is obvious that he was beginning to struggle with the bane of lefthanders everywhere - wildness. In addition to walking 82 batters he also hit five and threw 15 wild pitches. Of course his 108 strikeouts showed that he could control his pitches on occasion.

While Darren's ERA had climbed from 1988 to 1989 it was still pretty acceptable and the extra run could be attributable to the increase in competition. The wildness was a concern but it is also expected with southpaws and especially with young hurlers. Oliver was still impressing management and still had time to learn the ropes.
Posted by Spiff at 9:04 AM