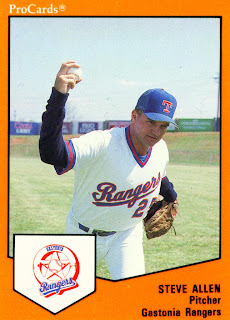 Texas picked up Steve Allen, seen here on card 1022 of the 1989 ProCards set, late in the 1988 draft. By late I mean he was the Rangers 37th pick. He was 21 years old. Most of the time guys taken that low and that old aren't really expected to make a big splash.

Steve started off his pro career with the Rookie League Butte Copper Kings in 1988. He split his time between starting and relieving. In 46.1 innings he posted a horrific 9.32 ERA and a 1.899 WHIP.

In spite of those numbers Allen got moved up to Single A Gastonia for the 1989 season. He also got moved out of a starting role. All 51 of his appearances for the Gastonia Rangers were in relief.

Apparently Steve found his groove in 1988. He pitched a total of 89 innings and managed to improved his numbers pretty dramatically. His ERA tallied to 2.02 on the season and his WHIP dropped to 1.022. He struck out 84 batters in route to a 2.71 strikeout-to-walk ratio. He did hit ten batters though.

By the end of the 1989 season Steve Allen seemed to be on his way to bucking the trend for low draft picks. His numbers at Single A had been pretty impressive and he would get a ticket to Double A Tulsa for the 1990 season as a result. What he needed to do was stay on track and continue to improve steadily. Improved control resulting in fewer hit batters was also an important area for improvement.
Posted by Spiff at 11:49 AM