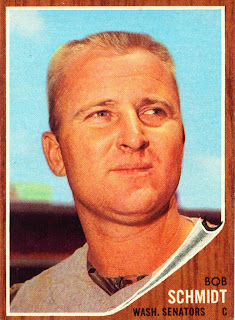 Washington picked up Bob Schmidt, shown here on card 262 of the 1962 Topps set, and Dave Stenhouse from Cincinnati on December 15, 1961. In return the Reds got Johnny Klippstein and Marty Keough.

Bob hadn't seen much action in 1961 with the Reds and the back of his 1962 Topps card says that he was happy to be with Washington where he would get more work. Bob did get more work with the Senators - about 51 games more. He was still the second string catcher though. Ken Retzer had the starting job.

In the 88 games Schmidt appeared in he got 274 plate appearances. He used those to post a .242 batting average and a .281 on-base percentage. The 37 strikeouts as compared to the 14 walks helped put a damper on the on-base percentage. Not great numbers but apparently when he hit, Bob could hit for power. Of his 62 hits, ten were home runs and 14 were doubles. He also batted in 31 runs.

Probably if Bob could have brought his on-base percentage up he could have given Retzer a challenge for the starting job. His batting average was only four points lower and he was better behind the plate. In fact, looking at the innings played on defense it looks like Schmidt often served as a late-inning defensive replacement. In 639 innings Bob committed just one error for a fielding percentage of .997. That was eight points higher than the league average and the best in the American League for backstops. He also caught 53% (16/30) of base runners trying to steal on him.

All in all Bob Schmidt appeared to have the glove and the power to play every day. He just needed some patience at the plate in order to bump up his on-base percentage. He didn't seem to be in a bad position with the team still in flux. From all appearances Schmidt stood an excellent chance to challenge for the first-string catcher's job in 1963. Appearances can be deceiving though and Bob's 1963 season would not turn out the way he was probably thinking it would.
Posted by Spiff at 11:07 AM