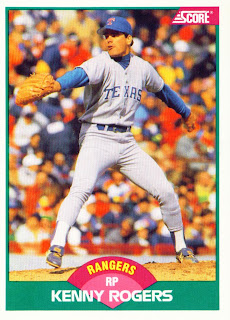 On June 29, 2005 Kenny Rogers, shown here on card number 107T of the 1989 Score set, was nearing the end of his third stint with the Rangers. As he walked out onto the field in Arlington for pre-game warmups he spotted two cameramen filming him. Unprovoked, Rogers confronted the two men.

Kenny shoved a Fox Sports Net Southwest cameraman and told him, "I told you to get those cameras out of my face." He then grabbed a camera from a local television station's cameraman, threw it on the ground, and kicked it. Kenny then went after two other cameramen. Rod Barajas stepped in though and got Rogers off the field. As he left Rogers was saying that he would break all the cameras.

What made the incident so odd was that neither cameraman who was assaulted had even spoken to Rogers. In fact, Kenny had stopped speaking to the media following a previous story in the local news that he was having trouble getting a contract extension from the Rangers and might be considering retirement if the extension wasn't granted.

Stories like that are annoying and the media can be a real circus but Rogers apparently had some deeper issues. ESPN quoted Texas General Manager John Hart as saying, "Kenny is having anger issues right now, I don't know what's going on inside. We're responding to something that's very unusual." Unusual is right. Rogers had just missed a start after breaking a finger during an angry outburst and now he had gone after two members of the media. Something was definitely wrong.

The Rangers sent Kenny home and contacted the Commissioner's Office. A suspension and fine were levied. The cameramen filed charges with the Arlington Police and Rogers ended up with two misdemeanor charges and anger management classes. He also had to deal with a civil suit from one of the cameramen.

At the end of the 2005 season Texas did not resign Rogers. He didn't retire either as he signed with the Detroit Tigers and pitched for three more years before retiring. Too bad that one of the last memories Rangers fans have of him is this incident.
Posted by Spiff at 4:12 PM