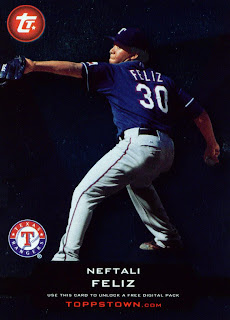 Jon Daniels has said that he has two goals for the Texas Rangers: keeping the core of the team and focusing on pitching. Yesterday he made a move that fell into the second category.

Texas dipped into the free agent pool for the first time this off-season with the signing of pitcher Joe Nathan. Nathan had been the Twins All-Star closer from 2004 to 2009. He missed the 2010 season due to Tommy John surgery and struggled with injuries in 2011. Obviously Daniels is hoping for a return to Nathan's pre-2010 form. That is a distinct possibility for an experienced pitcher like this. If that doesn't happen the contract is only for two years and has a buyout option on it.

If Joe can get his game back to his 2009 level he will help shore up the bullpen. He also allows the Rangers to move Neftali Feliz to the starting rotation. Feliz, shown here on card TT2-24 of the 2011 Topps Town set, was a starter prior to being called up the the Major Leagues in 2009. For a long time he was viewed as a potential top of the rotation arm, apparently that's back on the table.

For his part Neftali seems to have moved past his discouragement with the abortive move to the rotation last Spring. He released a statement saying that the Rangers had talked to him about the move and that he was happy with it. He referenced his minor league pitching career and says he is already running more in order to be ready to enter Spring Training as a starter. If Feliz can live up to his potential and Holland continues to solidify I think that Texas is looking at two very strong guns to lead off the rotation.

The Rangers say that their decision in signing Nathan and moving Feliz had nothing to do with the latter's blown save in game six of this year's World Series. I believe that. Jon Daniels, Nolan Ryan, and Ron Washington don't make decisions based on one game - even a game for all the marbles. Looking back at last Spring and before Feliz made the Majors in 2009 it seems to me that his being a starter was always the plan and that the closer gig was just a detour.

Texas is also saying that the signing of Joe Nathan is not a comment on their attempts to re-sign C.J. Wilson. I'm going to have to pass on buying that one for now. Wilson is reportedly looking for at least a six year deal and Texas is notorious for cringing at long-term deals for pitchers. They'll still try and get Wilson to stay but this deal looks like an insurance plan they are likely to use.
Posted by Spiff at 10:15 AM

Nefti is going to have to work on some other pitches to be a truly effective starter. Too often his fastball, as fast as it is, is just flat and the good hitters don't care how fast it is if it's just coming in a straight line every time. That said, I'm excited to see what he can do as a starter. As for CJ, I'd like him to stay, but the GM in me is not giving ANY pitcher a 6 year deal. It's too risky. I don't blame him for wanting a long term deal, but I'm not taking that risk if I'm the Rangers.