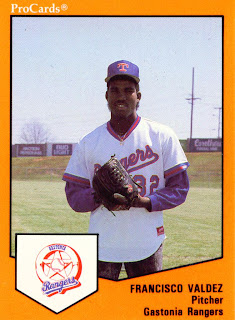 Francisco Valdez appears here on card number 1020 of the 1989 ProCards set. Judging by the picture Francisco didn't get the memo about picture day. It looks like he is wearing jeans underneath his untucked jersey.

Texas signed Francisco as a free agent in January of 1987. After waiting a season, perhaps for Valdez to complete high school, the club started him at Rookie Ball in 1988. Francisco pitched in 13 games and tossed 63.1 innings for the Gulf Coast League Rangers. All but one of his appearances was as a starter. His 3.55 ERA wasn't anything to write home about but it was good enough to get him a ticket to Gastonia for the 1989 season.

Francisco continued to start in A Ball. Of his 26 appearances 24 were starts. All told he would pitch 135.1 innings and post a 14-3 record. He also saw improvement in important areas. His ERA dropped to 3.13 and his WHIP dropped 136 points to 1.190. He strikeout-to-walk ratio also improved slightly to 1.56.

1989 had been a good year for Francisco Valdez. At age 19 he seemed to be a solid pitching prospect for Texas. He wasn't burning through the system but he was young and was making progress. Texas needed pitching and Valdez seemed to be on his way. That makes it all the more strange that the 1989 season was his last in pro ball. In spite of looking I can't find any information on why. After just two years Valdez's career seems to have come to an abrupt end.
Posted by Spiff at 6:25 PM

A number of Gastonia players are wearing mismatching pants. Seems the photographer told them they just needed to where their jersey because the card company would crop the photos. Obviously, ProCards did shoddy work.