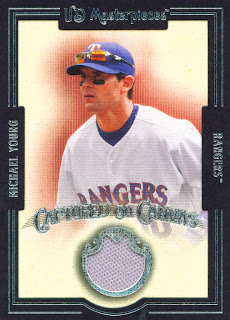 As long as Michael Young has been with the Rangers you would have to figure that he would eventually show up on T.R. Sullivan's list of the Fifty Best Seasons in Rangers history. Sure enough, here he is at number ten.

Young, shown here on his 2007 UD Masterpieces Captured on Canvas card, has been Mr. Consistent during his time with the Rangers. That makes picking a best season a little difficult. T.R. tabbed 2005 as his entry on the Best Seasons list.

As a result of those numbers Young was named to All-Star team and received MVP consideration. Amazingly he did not win a Silver Slugger award.

*T.R. Sullivan published his list of the Fifty Best Seasons in Rangers history on June 13th of this year. At that time there is no way he could have known what kind of season Michael would turn in this year. While Young did not win a batting title this season it is up for debate if 2011 was a better year for him than 2005.*
Posted by Spiff at 10:55 AM