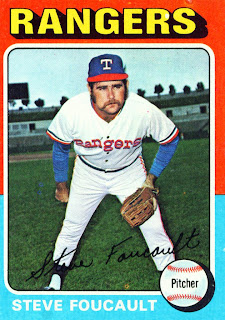 Steve Foucault, shown here on card number 283 of the 1975 Topps set, had turned in a career year in 1974. His bullpen performance had played a key role in Texas remaining in contention as long as they did.

Manager Billy Martin had called on Foucault a career high 69 times in 1974 and he had pitched in a career high 144.1 innings. By 1975 those innings appeared to be taking a toll.

Steve tossed 107 innings in 1975, second most among Texas relievers. He posted a 4.12 ERA and a 1.411 WHIP for the year. Both were significantly higher than the year before. His strikeout-to-walk ratio also went the wrong direction as it fell to 1.02. That was less than half of 1974's total.

Steve Foucault had been ridden hard in 1974 but had done well. 1975 was a different story though. Whether it was overuse from the previous year or a failure to make needed adjustments, things had not gone well. From a key component in a contender Steve had gone to a big question mark. He needed to get some rest and figure out what he needed to do to recapture the magic of 1974.
Posted by Spiff at 2:26 PM